“… a highly possible Soviet breakthrough might open three continents to Soviet penetration. Like apples in a barrel infected by one rotten one, the corruption of Greece would infect Iran and all to the east. It would also carry infection to Africa through Asia Minor and Egypt, and to Europe through Italy and France …” – Dean Acheson

“If Southeast Asia is also swept by Communism, we shall have suffered a major political rout the repercussions of which will be felt throughout the rest of the world, especially in the Middle East and in a then critically exposed Australia.” – NSC 48/1

“Finally, you have broader considerations that might follow what you would call the ‘falling domino’ principle. You have a row of dominoes set up, you knock over the first one, and what will happen to the last one is the certainty that it will go over very quickly.” – President Eisenhower 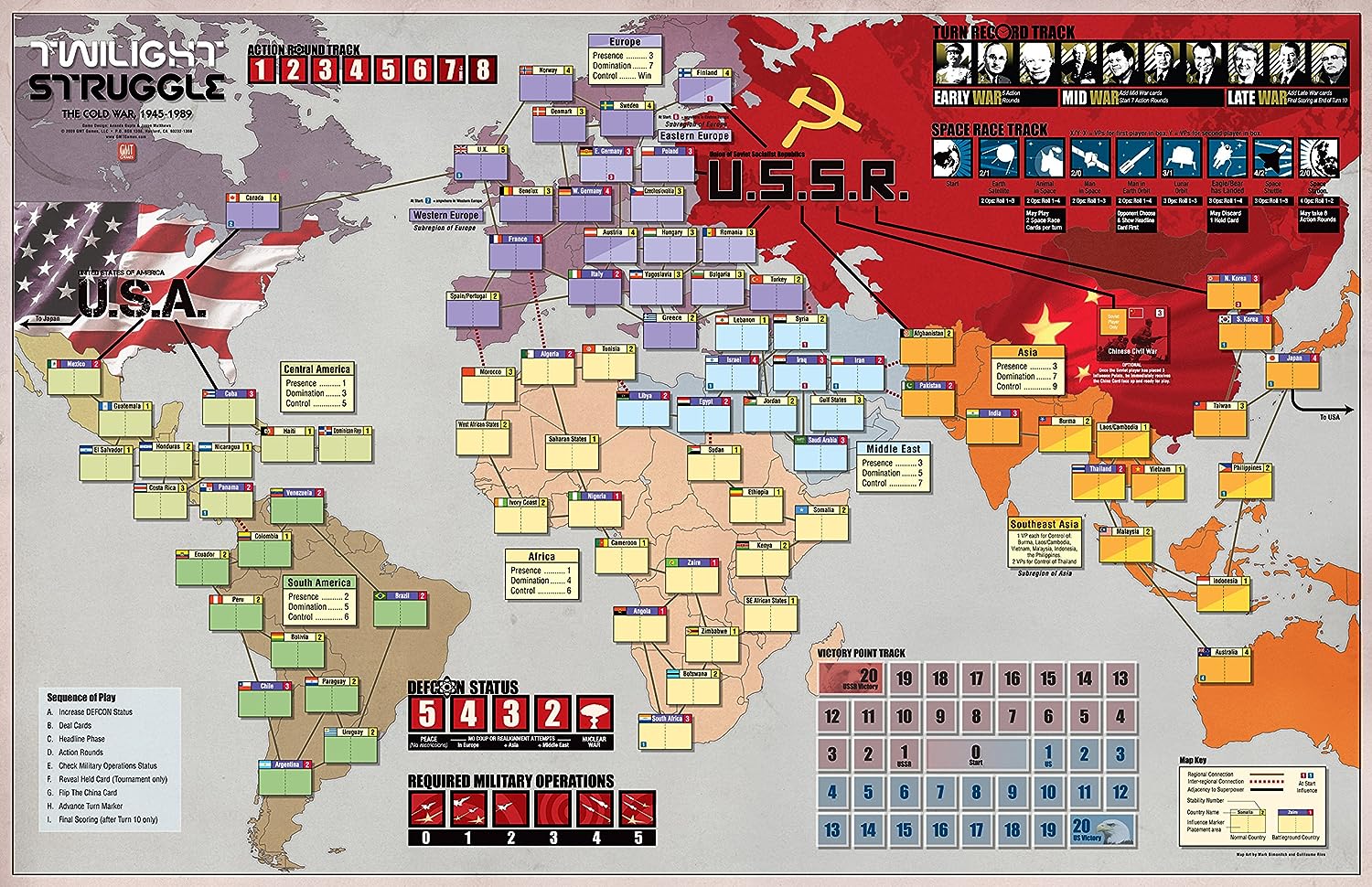 Recently I’ve become totally addicted to Twilight Struggle, a Cold War-themed board game (also available in an excellent digital version). The more I play, the more impressed I am with how the game models the domino theory, one of the fundamental ideas in US foreign policy during our half-decade struggle with the Soviet Union.

American statesmen developed the domino theory in the late 1940s and early ’50s, a time when communist movements were spreading rapidly around the world. As the quotations above make clear, these statesmen believed that communists in places like Greece or China would try to spread their movements to neighboring countries and regions. A communist regime, even in a tiny country that posed no direct threat to America, could destabilize an entire region if left unchecked. Therefore, it was vital for the US to contain communism wherever it popped up.

The mechanics of Twilight Struggle simulate this theory beautifully. It’s a two-player game (one player is the US, one is the USSR), and the board is divided into nations and regions. Players take turns placing influence around the board, and can win the game by scoring points based on controlling different regions (there are other paths to victory, too, like winning the space race).

So where’s the domino theory? It comes with a brilliantly simple twist: players can only place influence in a nation where they already have it, or in neighboring nations. Just like Acheson and Ike said, influence spreads in a linear fashion from one country to the next, and players who ignore enemy moves will find an entire region slipping swiftly into their opponent’s camp. 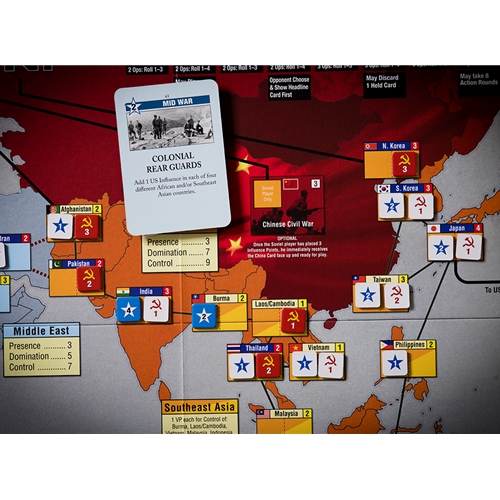 The one exception to the linear spread of influence comes with cards, which the US and USSR take turns playing. Each card represents a real-life event from 1945-89: Nasser taking power in Egypt, the Cuban Missile Crisis, the OPEC embargo, Kruschev declaring “We Will Bury You!”, and so on. Cards allow players to break the rules of how influence spreads by suddenly opening up new fronts around the world. The USSR, for example, starts the game with no influence in Latin America or the Caribbean, but playing the “Fidel” card allows them to take control of Cuba.

The cards make for fantastic and nail-biting twists and turns in each game of TS, but they also contribute to the game’s simulation of American ideas in the era of the domino theory.  For much of the Cold War, US policy-makers tended to view communist movements in the “Third World” as fronts of a single global movement led by Moscow. This is exactly the way it is in TS: it’s the USSR that decides when Vietnam revolts, when Nasser or Fidel take power, or when communist agitation sweeps South Africa. The same goes for events that favor the US. It’s up to the players when pro-democracy agitation breaks out in Eastern Europe, for example. 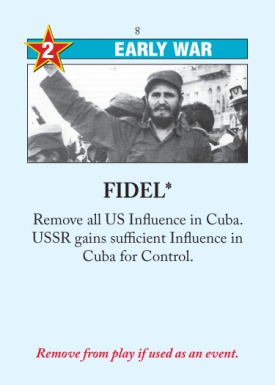 The card mechanic sacrifices historical accuracy while hewing more closely to the imagined dynamics of the domino theory. As the game’s creators say in their design notes:
“Twilight Struggle basically accepts all of the internal logic of the Cold War as true—even those parts of it that are demonstrably false. Therefore, the only relationships that matter in this game are those between a nation and the superpowers. The world provides a convenient chess board for US and Soviet ambitions, but all other nations are mere pawns (with perhaps the occasional bishop) in that game. Even China is abstracted down to a card that is passed between the two countries. Furthermore, not only does the domino theory work, it is a prerequisite for extending influence into a region. Historians would rightly dispute all of these assumptions, but in keeping with the design philosophy, we think they make a better game.”

In reality, Soviet and American leaders struggled to control movements around the world. Leaders from Venezuela to Vietnam had their own agendas, and popular movements (even massive ones, like the revolutions of 1989) often caught American and Soviet leaders off-guard. TS simulates this lack of total control to an extent by randomizing the cards players hold each round. It also frequently forces players into situations where they have to play a card that favors their opponent. Still, it’s the superpowers that decide when, and sometimes if, these events take place.

So while TS isn’t a great simulation of the dynamics of the real Cold War, it is stone-cold brilliant at depicting the way US policy-makers imagined the conflict. On top of that, it’s a phenomenal strategy game. A glance at the Twilight Strategy fan page shows its daunting depth. If you have even a passing interest in the Cold War or in historical strategy titles, I strongly recommend picking up a copy. And if you don’t mind dealing with a neophyte player, let me know — I’m hungry for some competition online!