I had a history prof who once suggested that US history would have turned out for the better if, at the end of the Civil War, the federal government had wiped out the entire leadership class of the Confederacy – “like the end of the Taiping Rebellion,” she added.

The what? Leaving US history aside, the Taiping rebellion (or Taiping Uprising, or Taiping Civil War) is something that never pops up in most westerners’ history education. But it should. Not only was it the bloodiest civil war in human history; western nations, as historian Stephen Platt makes clear in this book, played a major role shaping the course of the bloodshed. 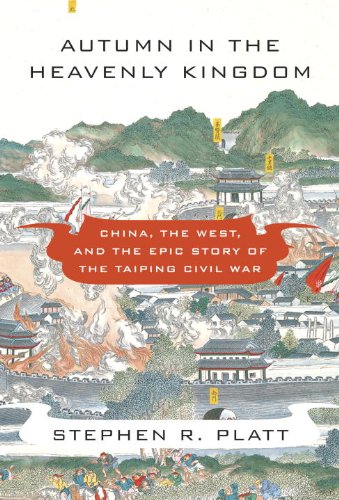 I’m ignorant about the historiography for this event, so I can’t really comment on Platt’s argument. What I can comment on is his craft as a writer of historical narrative.

Platt has two keys to telling the story of the Taiping Rebellion well. First, Platt focuses his narrative of this massive bloodletting on a concise cast of characters. The two big ones are Taiping policymaker Hong Rengan and the Confucian-scholar-turned-general Zeng Guofan. Fascinating minor characters round out the cast: arrogant British diplomats, conniving American mercenaries, and delusional missionaries from everywhere. Platt’s good at connecting the sweeping themes and events with the first-hand observations of the poor bastards who had to actually slog through the misery.

His introduction of Zeng Guofan is Exhibit A for How To Introduce A Character. Watch Kurt Vonnegut’s video on the shape of stories on Youtube. Characters’ stories need shapes. They need to start somewhere and go somewhere, up or down. Zeng’s story has a crystal clear shape. He starts low: he’s old, suicidal, sick (puking, in fact), holed up in the mountains. Yet this old Confucian nerd ends up becoming the Chinese Ulysses Grant, saving a corrupt, collapsing dynasty before getting the cold shoulder and suffering a sad, obscure retirement. Make a graph for that and you have a nice clear shape.

Platt’s second key is sensory detail. Like the shapes of characters’ stories, historians aren’t always great at this, even though it’s a fundamental writing skill … remember all your English teachers who harped about “show, don’t tell?” When historians do sensory detail, it’s usually a throwaway. The weather was nice when President X took the oath of office. The eccentric inventor has unkempt hair and a twirly mustache. The historian will mention it once, in a couple of throwaway lines at the start of the book or the first time a character pops up and never mention it again. Novelists don’t do this. They know your  ape brain won’t remember a few pages later which character had a hooked nose and muttonchops, or that there was green ivy on the walls of Lady Whatever’s estate. They weave that stuff into the text, repeatedly. Readers need that. We like it.

Platt does this, and he’s good at it. (Check the author’s bio, and you’ll see he has an English degree.) Go read his description of the Anglo-French expedition up the river to Beijing. It’s awesome, and it’s because of his rich use of sensory details pulled from primary sources. The mud sucking at the marines’ boots as they storm the forts at Taku, the sparks from cooking fires illuminating the steamships’ rigging at dusk, the churning fog offshore … it’s all there, and it’s enthralling. It turns a “they went from x to y to z” narrative into a Heart of Darkness journey. Every historian should print this passage out and post it on their wall.

My one minor complaint is that Platt is sometimes a bit too enamored with dissecting articles in the British and American press. I love close reading, but these sections crop up a bit too often and go on a bit too long, gumming up the works and slowing down the narrative. It takes us out of the character-driven stories that make the rest of the book so compelling.

So yes, you should read this book if you’re interested in Chinese history, the global history of the 19th century, western involvement in Asia … But (for me anyway) the best thing about this book is that it’s an example of a kind of historical writing that few can do well. Like Barbara Tuchman, Platt cares about what these experiences looked, tasted, and smelled like. He cares about characters. He cares about tone. Books like this one make the case for writing history with a novelist’s eye.